The View From Down Here

This article was originally published in A&U Magazine.

Around the first of April of this year, I began using a wheelchair when I leave the apartment. This was an inevitability that I resisted, fought off for as long as I could. Admitting that I need a wheelchair struck me as “the last straw,” akin to simply giving up, accepting the fact that the virus is winning. Worse, I have become more of a burden to my fiancé Rick than a companion. (When he read a draft of this column, Rick balked at my thinking I’m a burden on him and assured me that I’m not. He’s a good man that way.)

However, between the debilitating pain in.... Read More

No One Deserves To Be Invisible

by Dr. Theodore Hutchinson. This post originally appeared on the SAGE blog.

On the day I was born 63 years ago, I became a ghost when these words were uttered: “Congratulations, it’s a girl!”

I am a person who is transgender. Although the signs were present throughout my life, the conversation and knowledge about trans folks were not a part of mainstream life in the U.S. back then. I was invisible to myself and to others.

by Dave Singleton. This article originally appeared on Caring.com.

That’s what I learned touring over 30 assisted living homes and senior communities in recent years. Some visits were for an article I was working on or for volunteering. Others were personal: I was looking for a welcoming home for my mom.

Having written about LGBT housing for five years, I asked myself the same question when I walked through the doors of each community: Would I feel comfortable here if I was older and ready for a senior community?

The answer was always no, and not because I thought the managers and workers at those homes were bigots. I asked.... Read More Indeed, LGBTQ/SGL people could be fired from their jobs; have their children taken away through the.... Read More

The Trump administration is giving businesses and medical providers a license to discriminate: to deny services to LGBT individuals based on religious or moral beliefs. In response, SAGE is enlisting the power of the LGBT community, its allies, and organizations who care for LGBT elders to take a stand in our Care Can’t Wait social media campaign.

SAGE acknowledges and thanks all the partner organizations who have taken the pledge and encourages others to join us in standing up for LGBT elders in the face of religious-based discrimination.

June is LGBT Pride Month and although there are Two Spirit and LGBT members within Native communities, they are often apprehensive to come out. As the Indigenous Ways of Knowing Program at Lewis & Clark Graduate School of Education and Counseling notes, family is important within Tribal communities, and “too often, rejection of Two Spirit / LGBT community members by families, peers, and the community breaks families apart and tears at the social fabric of our community.”

This year, the National Indian Council on Aging (NICOA) wants to celebrate LGBT Pride Month by sharing some information on Two Spirit and LGBT Natives that are not only out and proud, but making a significant difference.... Read More The task force’s report was unanimously adopted by the Board of.... Read More

by Adam Polaski, Freedom for All Americans. This post originally appeared on the SAGE blog.

Five years ago, Pat Baldwin walked into the office of the executive director at the Hannan Foundation, an organization dedicated to preserving the dignity of elders in the state of Michigan, and took a seat. Pat, who is the director of the Hannan Center for Lifelong Learning, wanted to speak with the foundation’s director about an issue close to her heart—an issue for which she knew Hannan was uniquely suited to make a difference.

Having worked with older adults and the aging population at Hannan for the past 17 years, Pat recalls that she had seen an increase in troubling.... Read More

All too often, history is written by those in the mainstream, and the stories of marginalized communities – the stories of our elders – are lost. A team in St. Louis is working to recapture and map the history of LGBTQ communities in the region, and last month, they unveiled their interactive online map that documents queer history across the city from 1945 to 1992. Researchers identified 800 locations that were important to the LGBTQ communities in St. Louis during that time, including bars, bookstores, HIV clinics, cruising spots, protest sites, and locations of.... Read More 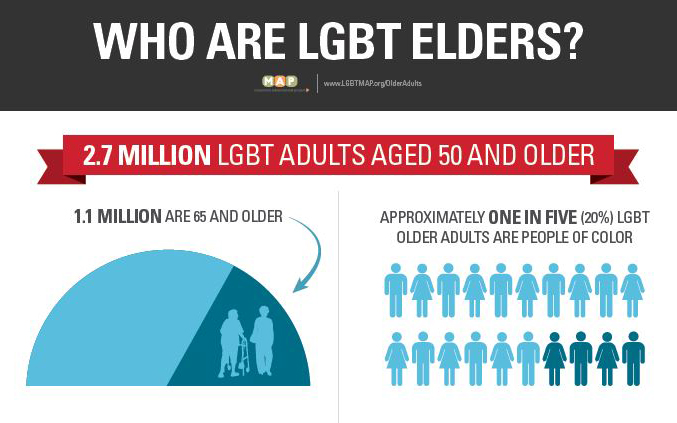